In the effort to reduce dependence on conventional power production in the European power market, the goals of ensuring a stable power supply, accommodating electrical grid expansion and optimizing the use of existing networks present new drivers for the technology of buried cables and DC grids. Renewable energy sources produce predominantly intermittently and are integrated into the electrical network mostly in decentralized units, requiring power transport over long distances. In contrast to the wireline cables, buried cables can overheat and jeopardize the network reliability. Optimizing soil- and cable thermal backfill parameters for long-term efficient and ecological operation of buried cables is part of the research carried out by the Institute for Applied Geophysics and Geothermal Energy (GGE) within the BMBF-supported openly funded project “Research Campus: Flexible Electrical Networks”. 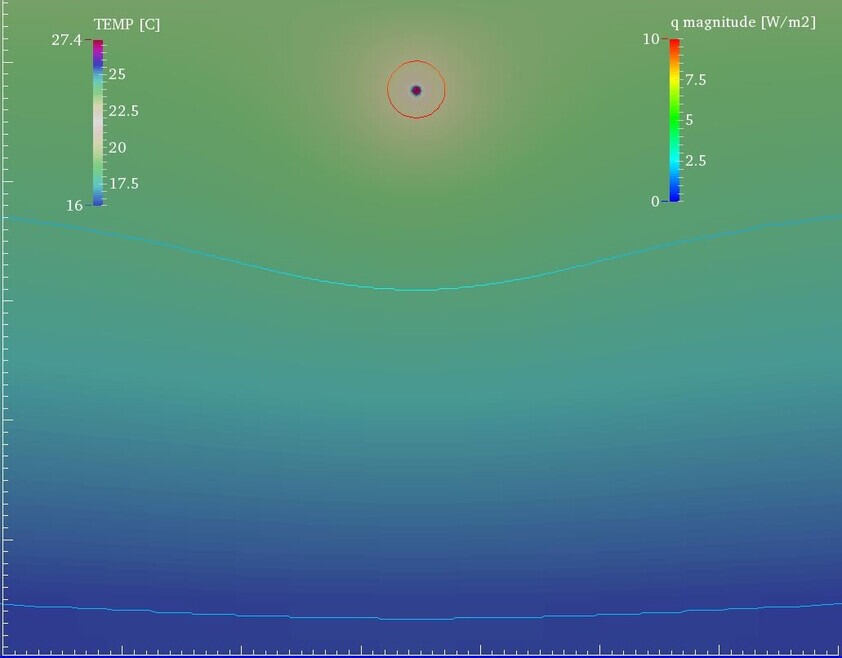 Urheberrecht: © GGE Fig.1:Temperature field of a buried electrical cable. The isotherms are colored according to the local specific heat flow. The spacing of axes ticks is 0.1 m .

We are using the in-house finite-difference code SHEMAT-Suite for coupled fluid and heat flow to simulate heat transport around buried electrical cables in complex geometries and different cable placement realizations in a layered ground, in the search for appropriate placement requirements that would allow higher electrical loads. The simulations take account of thermal dependence of the heat conductivity and of thermally relevant geometrical details of the cable. Of importance are also measurements of heat conductivity and of hydraulic properties, due to their influence on heat transport in both saturated and unsaturated media.

Our research is developed with an additional goal in mind: to support evaluation of designs for cooling systems, including a heating/cooling system which would divert the Joule heat of the buried cable to agricultural and other applications.