You Are Here: Research Areas

Within the framework of the establishment of the E.ON ERC, the Institute for Applied Geophysics and Geothermal Energy (GGE) at RWTH Aachen University has evolved from the former Institute for Applied Geophysics. The research at GGE focuses on geophysical and hydrodynamic reservoir engineering (e.g. for geothermal energy, CO2-sequestration, hydrocarbons) by using numerical simulation technology, petrophysics and borehole geophysics. 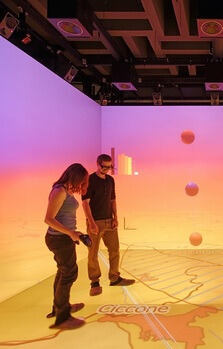 With respect to numerical simulation technology, one focus of research is to develop programs for the 3D-simulation of reactive flow, species, and heat transport as well as for 3D inverse parameter estimation. Applications range from porous over fractured to engineered hot-dry-rock reservoirs. Borehole measurements and their interpretation are performed mainly for determining the nature, sequence and properties of the drilled rock. In addition, borehole measurements are also used for reconstructing paleotemperatures on Earth’s surface from inversion of borehole temperatures and for quantifying smallest fluid flow rates in the deep subsurface from their thermal signature. With regard to petrophysics, we mainly focus on thermal and transport properties of rocks are in the focus of research. GGE’s research is often organized in cooperation with other university institutes and research institutions in Germany and abroad as well as in collaboration with partners in the industry.

Concerning teaching, GGE is involved in the B.Sc./M.Sc. programs “Applied Geosciences” and “Georesources Management” at RWTH Aachen University as well as in the international M.Sc. program “Applied Geophysics” performed jointly with the IDEA League partner universities TU Delft and ETH Zürich. Furthermore, GGE is a member of the graduate college AICES (Aachen Institute for advanced study in Computational Engineering Science), the Jülich-Aachen Research Alliance (JARA) chapters on energy and high-performance computing, and is associated with the Center for Computational Engineering Science (CCES). GGE is member of the German Scientific Earth Probing Consortium (GESEP) and the European Petrophysics Consortium (EPC).

In April 2011, GGE’s director, Professor Clauser, was elected member of the German Academy of Sciences Leopoldina .