Sie sind hier: Micro-scale simulations of NMR and SIP signatures of partially saturated soils and their up-scaling to laboratory and field scale 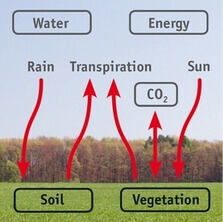 This research project is part of the interdisciplinary Transregional Collaborative Research Centre 32 (TR32) and hosted at the Institute of Applied Geophysics and Geothermal Energy (GGE). In TR32, the soil-vegetation-atmosphere system is studied by research groups at the Universities of Aachen, Bonn, and Cologne and the Research Centre Jülich in the fields of soil and plant science, remote sensing, hydrology, geophysics, meteorology, and mathematics. The soil, vegetation and the lower atmosphere are key compartments of the earth, where almost all activities of mankind take place. This region is characterized by extremely complex patterns, structures and processes acting at different scales in time and space. The quantitative prediction of the system behavior, the research aim in TR32, constitutes a major challenge to scientists and policy-makers, especially in view of the global climate change (see www.tr32.de for more information). TR32 was formed in 2007 to integrate monitoring with modeling and data assimilation in order to develop a holistic view of the terrestrial system. Recently, the 3rd funding period (from Jan. 2015 until Dec. 2018) was granted by the German science foundation, DFG. 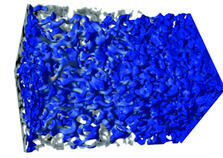 Urheberrecht: © RWTH Aachen Fig. 2 Modelling fluid flow in the pore space. Air (in blue) invades the water saturated sample from the right side.

Process formulations, e.g. for describing water transport in the partiallly water saturated zone of the subsurface, often rely on so-called parameterizations that replace complex small-scale processes with macroscopic simplified descriptions. These descriptions typically contain additional quantities that we refer to as parameters, which need to be determined empirically. Our project B8 aims at characterizing flow properties of partially water saturated soils without empirically determined parameter but by establishing direct relations between structural soil parameters (e.g., pore size distribution) and geophysical measurements. In particular, the geophysical methods NMR (nuclear magnetic resonance) relaxometry and IP (induced polarization) are considered in our project because they provide complemetary information about size and connectivity of the water filled pores. 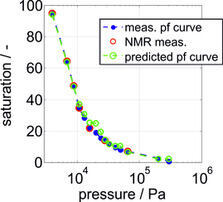 We perform both laboratory measurements and numerical modeling at the micro-scale (e.g. Mohnke et al. 2014b) to attain our goal of characterizing flow properties of partially water saturated soils using these non-invasive methods. We study the spatial distribution of water and gas at the pore scale together with their flow properties (fig. 2, in collaboration with project A4). Moreover, we develop and apply simulation tools for forward and inverse modeling of water distribution in the pores together with the NMR and electrical signals of these pores (Mohnke 2014 and Mohnke et al. 2014a) which enables us to predict soil properties such as water retention (fig. 3). 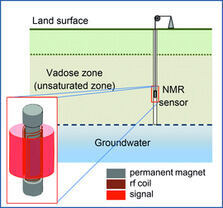 Urheberrecht: © RWTH Aachen Fig. 4 The NMR slim-line logging tool developed by project A1 will be applied in the next project phase for characterizing the storage and flow properties of soils.

In the next project phase, starting in Jan. 2015, we will estimate flow properties in the field for parameterizing hydrological models used for simulating water and gas flow in the vadose zone at larger scales by other TR32 projects. For that, NMR and IP data will be utilized to probe the subsurface using a slim-line logging tool (fig. 4) developed by project A1. The estimation of flow properties requires the add-on of additional sensors as well as the further development of an joint inversion approach developed in the previous project phase.

The project is funded by the German science foundation, DFG.