Figure 1 Integrated Workflow for assessing the geothermal potential of a city quarter.

During the first phase of EoCoE researchers at the Institute for Applied Geophysics and Geothermal Energy (RWTH Aachen University) assessed the geothermal energy potential for a city quarter situated in the Lower Rhine Embayment. They had the opportunity to interact with stakeholders from the city of Geilenkirchen who are planning the reconstruction of a former NATO settlement next to the NATO-Airbase in Geilenkirchen-Teveren, north of Aachen (Germany). This way the simulations represent realistic scenarios for district heating and results may have a direct application in the renewed city quarter. Additionally, the study area in the Lower Rhine Embayment reveals results of more general interest for geothermal applications in sedimentary basins facing medium to high groundwater flow rates.

The integrated approach comprised geological modeling, numerical flow and heat transport model calibration, uncertainty analysis of flow model parameters and borehole heat exchanger (BHE) field simulations. The objective was to study BHE field performance in terms of long-term operation and efficiency, as well as its thermal impact on the ground.

The 3D coupled numerical flow and heat transport code SHEMAT-Suite includes a finite differences approach for calculating heat transfer processes within the borehole heat exchangers (Mottaghy & Dijkshoorn 2012). This allows for considering heterogeneous geological models and the influence of groundwater flow (i.e. advective heat transport) on the BHE performance. The approach is computationally feasible for whole BHE fields and long-term simulations without the need for simplifications in operation time or temporal resolution of the BHEs. Additionally, code developments towards High-Performance Computing (HPC) and the use of modern HPC architectures enable simulating larger model areas or finer discretization in order to resolve heterogeneous or complex model geometries in more complex geological study areas.

A detailed geological model was built with focus on hydraulic characteristics of the subsurface, representing aquifers and aquitards. The geological model comprises nine different units down to a total depth of 750 m with a lateral extent of 3500 m × 3800 m. Heat transport models were calibrated to temperature data from boreholes. Calibration showed strong influence of lignite seams in the area. Due to low thermal conductivity and low permeability, those seams act as thermal insulators, increasing the temperature gradient locally. Subsequent Monte Carlo simulations addressed model uncertainties. The low spread of the results suggest, that heterogeneous permeability has a minor impact on the simulation results, compared to hydraulic head boundary conditions and thermal conductivity of the units. The mean ensemble result represented the input for BHE field simulations.

Simulation results based on multi-year outdoor temperature records show that a BHE field layout with one borehole heat exchanger per building can be operated efficiently over a period of 15 years. Due to northward groundwater flow, thermal plumes of reduced temperatures develop at each BHE, showing that BHEs in the southern part of the model affect their northern neighbors. Changing the layout of the BHE-field significantly reduces influence of BHEs among one another, and thus increases the performance of the BHE-field. Furthermore, the preceding simulation of the buildings’ thermal power demands allows for evaluating the influence of the building state (old vs. retrofit vs. new) on the long-term BHE field performance. For instance, our simulations show that the cooling effect of the BHEs in the subsurface is about 3 K lower for retrofitted buildings. 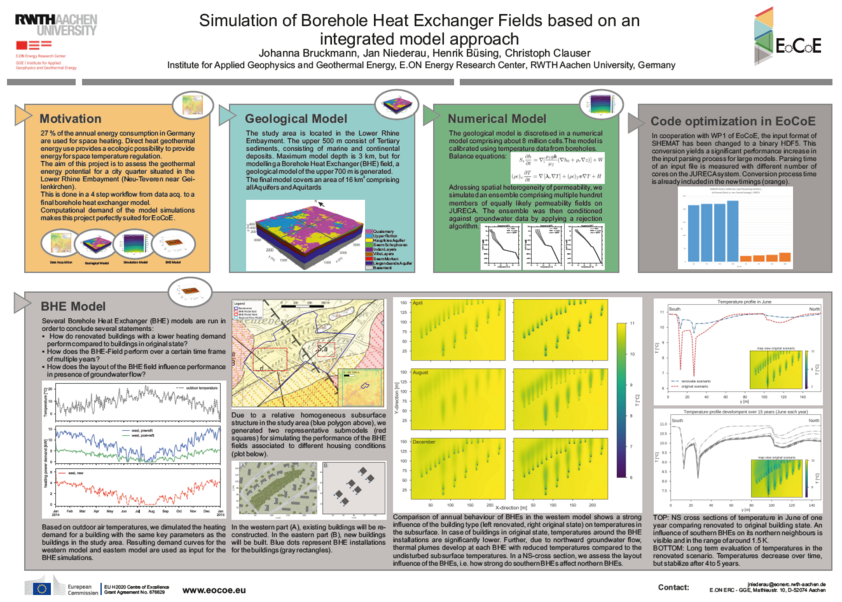 D4.3 - Layout of an energy supply system for Teveren based on geothermal direct-heat